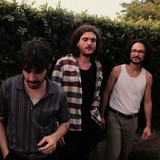 NOAHS is an Indie folk trio from Brazil, originally formed by Murilo Brito (vocals and guitars), Danilo Brito (bass), and Bruno Bastos (producer and guitars, now former member), and subsequently, Felipe Hipolito (drums). Strongly influenced by contemporary Folk, the band explores a sound with organic layers and synthesized elements originated from Alternative rock. The intense percussive identity within the songs, can be noticed in a subtle way in the various percussion instruments used in the recordings. Drums and bass lines are simple and direct, carrying out the real purpose of the song. The high quality songs are produced with the objective of reaching out to the public in an intense and impacting way. The mixture between remarkable melodies, elaborated vocal lines and lyrics which express everyday humane experiences, turn genuine compositions into an intense feeling of well-being to those who listen to them.