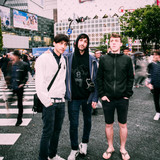 Vasudeva have always been hard to pigeonhole. Growing up on the quieter streets of New Jersey, but with New York City just moments away, childhood friends Corey Mastrangelo (guitar), Grant Mayer (guitar/keys) and Derek Broomhead (drums) would spend their summer days running from punk shows to late night raves, living a dichotomous life that wormed its way into their music. Forever too dancey for their post-rock peers, but too post-rock for their dance music friends, Vasudeva’s career to date has been spent on a tightrope, the tension between walking that fine line adding an angst to their soaring tracks. On their new record, Generator, however, things are different. There is a sense of peace and assuredness to the New Jersey trio - no longer three kids in their early-twenties trying to find their way, it feels like Vasudeva have finally found what they were searching for. A seamless and soaring record, Generator sees Vasudeva truly completely comfortable in their own skin for what feels like the first time. Written, produced and engineered by the band over the course of three months in early spring with the help of their long-time friend Kevin Dye, it is an entirely personal, (almost) chronological time capsule of the band as they entered their late twenties; growing and evolving as people, their music following suit. - Conor Mackie