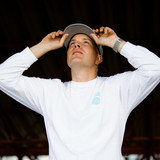 As a San Francisco-based artist and label owner of Richland Records, SCS has been at the forefront of conscious Hip Hop since early 2016, inspiring and empowering his listeners along the way. His debut album 'First Day of School' came out in September 2016 and was followed up by 'Leaps & Bounds', another full-length LP. He has since put out several singles & music videos — and is applying the final touches to his third studio album 'Up & Away', which is due for release in 2020. For SCS, music is a vehicle through which transformation can happen, and he's on a mission to effect this change, one song & one message at a time. He invites you to join him on this journey.