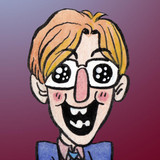 Patrick Alexander, what a good, thin man, and what a very real and serious musician. "This is important," he thinks, as he makes the notes go. "Hmmm," he says for many hours as he writes words so that they rhyme. "Bugger me!" cry the critics, mopping their foreheads, their hands shaking, their knees awobble. Of course they are astonished — nearly hyperventilating — at Patrick Alexander's genius — their scarves all but drenched with spit dripping from their dumb gaping mouths — but more than that, they are awed that a mortal man has the will and fortitude to endure the burden of that genius. "Cripes." — Now Grooves "At times frustable, yet also somehow spradocious." — Smart Music Boys Good Blog "Do-Re-Mi! Rock around the clock! Music's not just for kids anymore." — New York Fancier "HIM DO MUSIC GOOD, BARG BLARGA BARBLE, OH NO POO PANTS" — Cramb Spectacle (Twitter influencer) So um don't miss out on this great wonderful something something. Patrick is from Australia, lives in Tokyo, and also draws comics. In fact the album 'Tobias and Jube and the Something Hat Mystery: The Euphonious Companion' is — would you believe — the companion album to a comic he made called — wait, you'll never guess — 'Tobias and Jube and the Something Hat Mystery'. So that's pretty good eh. I think I'm close to the word limit now so goodbye everyone, goodbye my lovely friends, Merry Christmas