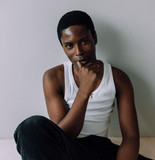 Over the space of eight years, Bongeziwe Mabandla has steadily built a career that now sees him take his place amongst Africa’s music luminaries.   Live, Mabandla is mesmerising – whether solo or with his band. Evidence of this is a year that has seen the Johannesburg-based artist expand his global audience with a brace of performances across Europe and Africa, alongside finishing an album that is set to cement his standing as an artist of the most singular gifts.   Heralded by two singles “Zange” and “Jikeleza” and due for release early in 2020, 'iimini' (days) will join 2012’s Umlilo and 2017 Mangaliso in capturing the recorded output of an artist who has been described as a “modern miracle” by Radio France Internationale (RFI) and recently profiled in prestigious UK music magazine, Songlines, among others.   “Everything I do is measured against how artistic and interesting it is – both for me and myaudience and I intend on taking that into 2020 with renewed energy,” says Mabandla.