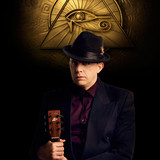 J. Wesley “Wes” Ulm is a trailblazing and award-winning musician, filmmaker, actor, TV quiz show champion, published novelist, physician, medical researcher, philosopher, and accomplished polymath. He is the founder, songwriter, and lead singer of the musical outfit J. Wes Ulm and Kant’s Konundrum and originator of the Hypno-Intox sound – a fusion of alternative, experimental and art rock, classical, and often nu-metal and blues elements with narrative-rich melodies and lyrics. The new style is marked by an energetic sonic tapestry that's at once rhythmic, exciting, and fun, yet also thought-provoking, evocative, at times even mystical. He released a breakout 4-song EP, Tales of a Wandering Soul, in 2018, and his band's first music video, for the track "A Hustler's Tale," set a record for a debut release with 10 prizes on the festival circuit. Two music videos have since followed, one completed and the other in post-production, for his riveting, Lovecraftian-themed flagship song ”Lorelei Part 1."

Wes is multilingual and is currently also creating tracks partially or wholly in Spanish, French, Chinese, German, and other languages, with a Cajun-themed romance tale -- "Angel of the Bayou" -- set to appear on his second EP.