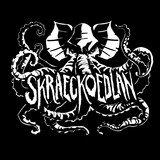 Space, in its unfathomable vastness, has since long been a subject of fascination for those who tilt their heads toward the skies. Full of awe despite its supposed desolation, it is here we place our hopes and dreams of a better future, of continued existence altogether. It is also here, where the lines between dream and reality become too subtle to differentiate, that we find four entities emerging from the apparent void. Their figures mere shadows, as if cast by the beckoning lights that burn from lifetimes away. Though the dead air does not reverberate, these travelers know not of silence. As wielders of the mighty fuzz-science fiction rock they seem to echo through the very core of existence, unearthing a reality more bizarre than the strangest of fictions. Yet they move forward, to the extent such a direction is possible in the depths of the universes. Their destination is unclear, as is their mission, but the cosmos is calling and they will answer. Inspired by uncertainty and with a serendipitous approach, they know but this: no power in the ‘verse can stop them!