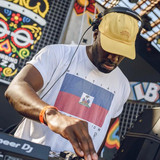 Emerging from the same stable as Duke Dumont and the late-2000s London deep house scene, producer and musician Tieks first started to produce music at the age of 14. Drawing from cinematic and classic '80s and '90s music influences such as Daft Punk, David Bowie, and Nile Rodgers, his unique blend of house and pop electronic influences saw him release his breakthrough single "Sing That Song," featuring Celeste, in September 2014. The track was subsequently featured on the U.K. advertisement for the British clothing line F&amp;F, propelling him to nationwide attention and landing him in the U.K. Top 100. He followed the next year with "Sunshine," featuring vocals by Dan Harkna. "Sunshine" climbed to number 15 on the singles chart, his highest to date. In 2017, Tieks returned with Chaka Khan and Popcaan on the single "Say a Prayer." ~ Aneet Nijjar