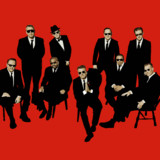 The Mighty Mighty BossToneS are a band on a mission. Since their formation, the pioneering ska-punk act has eschewed musical trends, survived the pitfalls of mainstream success, and continually crafted albums that pay homage to a genre that they helped create. The band's 11th studio album When God Was Great is the culmination of their extensive and all-embracing career and sees the band bringing back friends, tourmates, and bandmates from the past for a sonic celebration that stresses the power of perseverance and human connection during tumultuous times. "As grim as everything around us was in the outside world, this was the most fun we ever had making a record," explains the band's outspoken frontman Dicky Barrett. "The feeling in the studio was really magical and I think that quality presents itself on the finished—here's an ugly word—product." Co-produced by longtime collaborator Ted Hutt (The Gaslight Anthem, Dropkick Murphys) and Rancid frontman Tim Armstrong (Transplants, Jimmy Cliff) at Armstrong's Ship-Rec Studios in Silver Lake, California. The album sees the band—Barrett, bassist Joe Gittleman, saxophonists Tim Burton and Leon Silva, Ben Carr, drummer Joe Sirois, guitarist Lawrence Katz, keyboardist John Goetchius, trombonist Chris Rhodes and founding BossTone and original guitar player Nate Albert—coming together to create a collection of songs that initially arose out of a collective sense of loss.