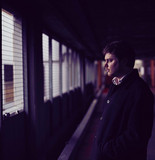 Michael Clark reveals ‘Talking to Nobody’, the second part of double A sided single that also features his recent release 'Winter Song'. After a period of touring last year, Michael went into the studio in Brighton to record this new single. The sound that he had honed while on the road with his band, the extra layers and textures that were brought into his previously more stripped back, folk inspired compositions are all captured here in these two melancholic and atmospheric recordings. Michael's music first started appearing online as early as 2014. They were self-recorded, self-released tracks that soon caught the attention of his peers and contemporaries while living down in Falmouth. The Line of Best Fit discovered his music and dubbed it ‘a veritable treasure trove of undiscovered sad bastard alternative’. His first single proper, 'Something to be Won' came out in the summer of of 2018 and was followed by the release of his debut EP in January of the following year. Following on from the EP release Michael played two sold-out headline shows, supported The Leisure Society on their UK tour (which included a show at London’s Union Chapel) and appeared at Sea Change and Deer Shed festivals.