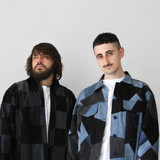 Electronic project of the sound producer and musician Maxim Sikalenko. First time Cape Cod declared about himself in 2016 with the release of the debut album "Cult". Stylized Retro House and Garage became a new ground for the Ukrainian electronic scene. Cape Cod received a number of awards, collected many positive reviews in press and for the next few years staked a place in the lineups of all the biggest festivals in the country. In 2018 Cape Cod returned with a new album called "Echoes". The album was recorded by vocalists from USA, Great Britain, Ireland etc.