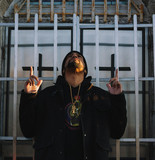 At just 15, Cambatta was self-manifested while writing rhymes to escape the realities of his native New Haven, CT. Living in the cross-section of the advantaged and the assailed profoundly affected Cambatta. After graduating high school, Cambatta left New Haven for Florida in 2008 and released his Visionary and Visionary 2 projects.   During that period, Cambatta pursued a spiritual awakening which resulted in a new way of being and his evolutionary Smoke & Mirrors mixtape collection. Smoke and Mirrors: The Porch was released in January 2013, while The Womb and The Crackbaby came in 2015. The projects showcased an insightful exploration of his upbringing which was in part stimulated by the use of mushrooms, marijuana, and other mind-altering substances.  By late 2015, Cambatta had reached a new plateau as an artist. 2016 saw the release of Smoke & Mirrors : DMT (Definitive MetaGod Trilogy), a collection of the best songs from his beloved trilogy and previously unreleased songs.  Moving to New York further influenced his artistry. In 2017, he collaborated with producer Black Magik for The Holy Ghost EP. The EP was a majestic exploration of the universe that showcased a mastery of lyricism and exemplified why Cambatta is widely regarded by his cult fanbase as one of the best conscious rappers in hip-hop – and one of the most conceptually ambitious.  - Andre J. Gee