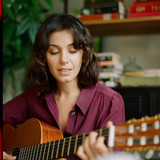 Katie Melua is one of Britain's most successful artists, having received over 56 platinum awards across a career starting at the tender age of 19. Originally born in Kutaisi, Georgia Katie moved to the UK aged 8. An accomplished songwriter and musician some of Melua's most well-known hits include ‘Nine Million Bicycles’, ‘The Closest Thing to Crazy’, ‘Perfect World’, and her now infamous cover of ‘Wonderful Life’. 2020 will see the release of 10 brand new songs under the title Album No. 8. When describing one of the final vocal recording sessions for Album No. 8, producer Leo Abrahams states “That run-through was one of the most extraordinary performances I’ve witnessed.” Album No. 8 represents the culmination of a prolonged period of musical rediscovery for the 35-year-old musician.

The video for the opening single ‘A Love Like That’ was created by award-winning director Charlie Lightening and features actor Billy Howle.