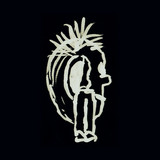 Vienna based trio MARY-ANN KIEFER; conceptually between band format and DJ set; scatters across the borders of mathrock, noise and electro-punk with a tense mix of influences like Squarepusher, Lightning Bolt and 65daysofstatic. Since 2011 they (almost) constantly have been working through structured chaos of hypnotic electronica and pour out effervescent sound waves, programmed to blow across space like a tsunami. The band was founded as a two-piece by Christoph Kirmaier and Michel Dedeyan and debuted with their first album dits&dots in 2012. Nine years later, Raimund Schlager (also known as the guitarist of the Viennese post-rock experimentalists le_mol) joined the band. Together they teamed up with Werner Thenmayer (Æther Kombo) at Elephantwest Studio Vienna to finally record the new EP „The Space. The Trance. The Future.“ - an adventurous collection of trippy glitch electronica, fuzzy noise rock, synthesizers and instruments sampled back and forth, heart ripping emocore and rhythmic experiments between drum’n’bass, hypnotic trance, tropical flavours and straight forward in-your-face post-punk.