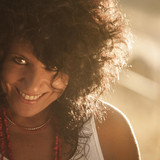 Talented and award-winning Spanish singer/songwriter Rosana Arbelo got involved in music after getting her first guitar at the age of five and composing her first song three years later. The artist's passion for music grew in her student years Lanzarote (Canary Islands), and she later moved to Madrid to study music. Arbelo composed songs for local celebrities such as Joaquín Sabina or Miguel Rios. She released her solo debut album, Lunas Rotas, in 1996. The album produced the singles "El Talisman" and "Sin Miedo''. Also, Rosana achieved two Ondas Awards. In addition, "El Talisman" and "Lunas Rotas" were chosen by director Quentin Tarantino for the soundtrack to his movie Curdled. In 1998, Rosana's Luna Nueva was released. The next three years saw her writing material for other artists, but in 2001 she returned with her third outing, which utilized the complex rhythms of her Canary Islands. ‘Marca Registrada’, a double-disc LP consisting of 12 of her greatest hits, ten brand new songs, and a pair of videos, surfaced in 2003, with her fourth studio long-player ‘Magia’, Rosana introducing a more pop/rock-oriented sound, a style she continued to explore on 2011's 8 Lunas. In 2016, Rosana released the ‘En la Memoria de la Piel’, which coincided with her 20th anniversary as a recording artist. In 2020, Rosana has released a new versión of

‘Sin Miedo’, with the colaboration of well known artists. All benefits are destinated to ‘Plan Cruz Roja Responde’.