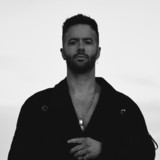 Travis Garland is an independent recording artist, songwriter & producer from Texas living in Los Angeles. After breaking onto the scene as the lead singer of pop group NLT, Garland’s solo releases have primarily explored the contemporary R&B genre. Collaborating in the past with producers like Timbaland, Ryan Tedder & Danja - Travis turned to the The Stereotypes (Bruno Mars, Miguel) to executive produce his self-titled debut album. In addition to touring and racking up over 100 million views on YouTube, Garland writes and produces most of his own material.