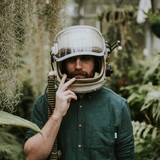 Adam Barnes is a songwriter known for his melancholic indie/folk songs that speak of lost love, wistful thinking and the occasional adventure too. Having moved from the countryside of England to the creative hub of Berlin, Adam has lent on his mixture of musical folk dramas and pop indie songs deriving from the experiences and struggles that seven years of songwriting has provided. Adam Barnes is yet to have a Wikipedia page written about him; it’s his biggest failure to date. For fans of: Donovan Woods, Noah Gundersen, Ciaran Lavery, David Ramirez, Richard Walters & Chris Ayer