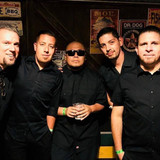 The Aggrolites are a 21st century ska band on a mission to remind modern audiences what proper ska sounded like, whether in Kingston in 1963 or in London in 1979. The Aggrolites formed in 2002, originally getting together as the backing band for a one-off Los Angeles show backing Jamaican music legend Derrick Morgan. Gathering members from two minor Southern California reggae acts, the new band consisted of vocalist and lead guitarist Jesse Wagner, rhythm guitarist Brian Dixon, organist Roger Rivas, bassist J. Bonner, and drummer Korey Horn. The concert was a success, and the band stuck together to record an album with Morgan that was never completed. Emboldened despite the recording setback, the band took the name the Aggrolites ("aggro" being a slang term of the ska-loving skinhead subculture of Britain in the 1960s and '70s, meaning pent-up aggression, and "lites" in tribute to the greatest ska band of all time, the Skatalites) and became the go-to guys on the West Coast ska and reggae circuit, backing a wide variety of golden-age Jamaican and British artists on their American dates, including the great Prince Buster and Culture lead singer Joseph Hill. On their own, with Rivas' funky organ work taking the instrumental lead in substitution for their lack of a horn section and Wagner taking vocal duties, the Aggrolites recorded their debut album, Dirty Reggae, at a live-in-the-studio session in 2003. Replacing Horn with new drummer Scott Abels (formerly of the popular third wave ska band Hepcat), the Aggrolites signed to the Epitaph Records subsidiary Hellcat Records in 2005. Their second album, The Aggrolites, was released in May 2006, with their third, Reggae Hit L.A., following in June 2007, by which time drummer Horn had returned to the fold along with new bass player Jeff Roffredo. In 2009, the Aggrolites released IV; it was their last album for Hellcat Records, and their fifth LP, Rugged Road, was issued by Young Cub Records in 2011. After releasing a live disc in 2012, the group's release schedule slowed, but in 2017 they teamed with Dela of Slightly Stoopid, backing him up on his debut album, Opening Night. By this time, the Aggrolites' membership had shifted again, with Rivas, Wagner, and Roffredo joined by rhythm guitarist Ricky Chacon and drummer Alex McKenzie. This lineup was responsible for 2019's Reggae Now!, the band's first full-length release in eight years. ~ Stewart Mason, Rovi