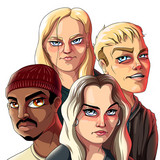 The Swedish producer/ songwriting team COY are back with a new sound and musical direction for 2020. 'Promises’ is a catchy mix of house, pop and “weekend” influenced

disco. (The song is written by the band themselves.) Promises will be the first of many releases from COY during 2020. ”This song is about love-bound promises that are easy to make but harder to keep. In a relationship people and feelings can change with time, and with this song we’ve tried to capture the moment when you realize that. It’s also a self reflection of repeating the same mistakes again and again. ” Lifehack according to