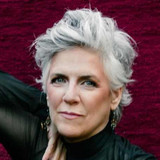 Being one of ten kids, Kate McGarry had to learn early on how to make her voice be heard. Hailing from the Boston area, McGarry attended the University of Massachusetts at Amherst and studied Afro-American music and jazz under such notables as Dr. Horace Boyer and avant-garde saxman Archie Shepp. Free from the confines of education, McGarry hopped into One O'clock Jump, a vocal group based in Boston. Thanks to their steady gigs in Monterey, McGarry got the opportunity to be a guest vocalist with Clark Terry and Hank Jones at the Monterey Jazz Festival. A taste for the sun on her lips, McGarry headed for southern California and became a well-loved staple on the Los Angeles jazz scene with regular appearances at hot spots such as Catalina's, the Jazz Bakery, and

Café. Critics and fans couldn't get enough of her, so McGarry finally ventured into the recording world with Easy to Love, which was released by Vital Music in 1992. Also, as she was in Hollywood, McGarry began to dabble in music for film and commercials, including tracks for Caught and Boiling Point. In 1996, McGarry needed a change and headed back east. This time she landed in a meditation ashram in the Catskills of upstate New York, where she lived and studied for three years. Returning to her career in 1999 with a move to New York City, McGarry once again hit the club circuit and recorded her second album, entitled Show Me. It was released independently in early 2001 and showcases a great jazz talent with an impeccable voice. McGarry joined Palmetto Records, which reissued Show Me in 2003. Mercy Streets, which featured her versions of songs by Peter Gabriel, Björk, and Joni Mitchell alongside standards like "How Deep Is the Ocean?" and "But Not for Me," came out in 2005. The critically acclaimed The Target followed in 2007, and McGarry's fifth album, If Less Is More...Nothing Is Everything, was issued in 2008. ~ Kelly McCartney and William Ruhlmann, Rovi