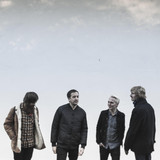 Judging by their name, one might think that Singing Swords ( sɪŋɪŋ sɔː(r)dz ) are a power metal band with lyrics about slaying dragons, conquering kingdoms and saving maidens. But no. That is, they easily could have been, as they all grew up in in the grim and frostbitten kingdom of Norway, spending their adolescent years listening to heavy metal and hard rock. And in their early days, they all played in bands that leaned to the heavier side of music. But suddenly, hardcore wasn't doing it for them anymore, so they started playing indie rock. In 2019 the band released their debut on their own label to mostly deafening silence, but a couple of people really seemed to like it. The radio show Stjernepose at NRK P13 even went as far as voting the track Stranger Things, third best song of the year. The NYC-based blog We All Want Someone To Shout For were also enthusiastic: "The album opens in big fashion with the sweeping “Y2K” that chugs along wonderfully with a 90's spirit and some passionate choruses that are naturally blissful and full of glowing life. It most certainly sets the tone for the rest of the LP."