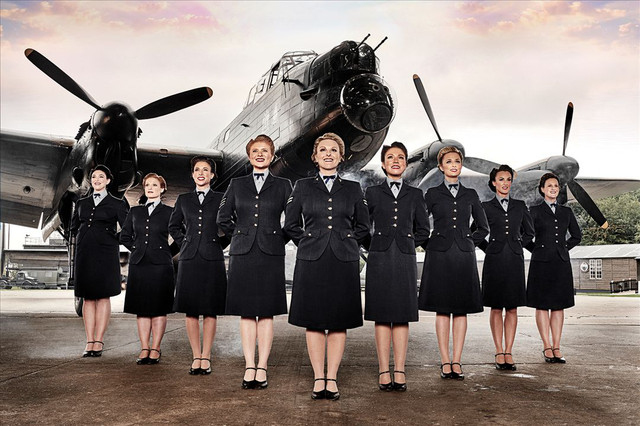 Novelty nonet the D-Day Darlings perform wartime vocal pop standards while dressed in WWII-era Air Force uniforms. After a decade in the game, they got their big break in 2018 when they got to the finals of that year's Britain's Got Talent, leading to a deal with Sony Music. The group, originally a trio, was formed in 2008 by 30-year-old Yorkshire-born Katie Ashby, a former stage school kid with numerous theater and screen credits to her name. Brought up on the music of the '40s and '50s, she became fascinated by her family's military heritage; full of admiration for the veterans of both world wars, she decided to give something back. Originally created to perform in old folks' homes, the trio's reputation quickly snowballed and soon they were performing at major veterans' events, such as the Royal British Legion's Festival of Remembrance at the Royal Albert Hall. Throughout, Ashby firmly remained the group's leader, keeping a tight rein on their image and repertoire, while overseeing a revolving door of members. By the time they auditioned for Britain's Got Talent in 2018, their ranks had swollen to a nine-strong choir, most of whom had some song, dance, or drama training. Alongside Ashby, only Nichola Roberts remained from the original trio. On the show, they quickly won over audiences and powered through to the final, but eventually lost out to comedian Lost Voice Guy. While their era-specific repertoire and costume could be viewed as a gimmick, they had a serious purpose in mind -- to keep alive memories of the two world wars and those who fought in them. After their television success, they were offered a deal with Sony Music and began recording their debut album with Little Mix producer Tim Woodcock. Entitled I'll Remember You and featuring two new songs written by Ashby alongside iconic wartime classics, it was released to coincide with the centenary of Armistice Day. ~ John D. Buchanan, Rovi