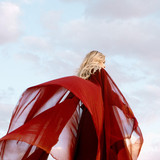 As Ruelle, Nashville-based singer and songwriter Maggie Eckford and her associate producers record a mature form of pop music, one that tends to be dramatic with heavy drums and electronic elements that cast dark undercurrents and a sense of urgency. Under her birth name, Eckford has released the relatively organic, band-oriented albums For What It's Worth (2010) and Show and Tell (2012). Her more shadowy material, billed to Ruelle, is comparable to the likes of Lorde and Broods, and was licensed for use in several television programs, including episodes of Revenge, Sleepy Hollow, and Scream: The TV Series. A handful of self-released tracks and an EP, Up in Flames, were scattered throughout 2014 and 2015 and caught on with attentive music fans introduced to her music on the small screen. "I Get to Love You," released in early 2016, was lighter in tone if as serious in sentiment, written by Eckford for her husband on their wedding day. The following year saw Ruelle issue a pair of new singles, "Secrets and Lies" and "The Other Side." ~ Andy Kellman