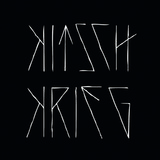 Few artists have left their mark on German music culture like KitschKrieg. Since connecting in a shared apartment in Berlin-Kreuzberg in 2014, the trio of producers Fiji Kris, Fizzle and elusive photographer/art director °awhodat°, essentially reshaped how Germany sounds, looks, feels. Whether it’s their stripped-back sonics drawing from soundsystem culture, grime’s DIY ethos and their hometown’s vibrant electronic music scene, the contrast-heavy, black/white imagery, or their instantly iconic streetwear creations – a true KK piece can be told from afar. KitschKrieg released their own eponymous debut album in 2020. It spawned no less than two #1 singles and has racked up over 400m streams to date. Bringing together influences from dancehall to avant-garde electronics to unapologetic pop, Afrobeats to afterhours melancholy, King Tubby’s mixing board wizardry to the Bauhaus school’s minimalism, the album features a diverse range of artists including national treasures Peter Fox, Jan Delay, Marteria

and global techno stalwarts Modeselektor, as well as jamaican dancehall icon Vybz Kartel. Widely seen as Germany’s most extraordinary pop phenomenon in recent times, the trio are set to make an even bigger splash in 2021, with their own sound and their own infrastructure in place, the first slew of international collaborations lined up. Follow our playlist: KitschKrieg FM