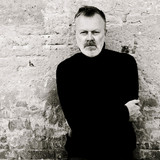 Jelle Paulusma is a musician, singer, songwriter and producer who gained prominence in the Dutch indie scene as the frontman of the band Daryll-Ann (1988-2004), with which he recorded six studio albums and toured internationally in the 1990s.

After he quit Daryll-Ann, Paulusma resurfaced with an experimental and rather dark solo album entitled Here We Are (2006).   The 2nd Paulusma album, iRECORD (2008), was received as a pleasant surprise: a lush, more melodic, graciously arranged album with a distinct sixties/west coast pop feel.   The third Paulusma studio album, Up On The Roof, which was released in 2011 through PIAS Holland, is in some ways closest to the music he wrote for his former band Daryll-Ann. Up On The Roof shows Paulusma's love for classic pop music, and he took the opportunity to re-record a song he wrote for Daryll-Ann almost 20 years ago.   In November 2014 Paulusma's fourth album, Pulling Weeds, was released through Excelsior Recordings. Due to the Daryll-Ann reunion tour that same year the album release was delayed for almost twelve months. The sound on Pulling Weeds is much more edgy than Paulusma's older work. The album got great reviews in the Dutch press.   Since September 2015 Paulusma is involved in the rather successful CSN&Y tribute group Her Majesty. This outfit has been touring extensively in Holland since January 2016 and will continue to do so until October 2018.   New album ‘Somehow Anyhow’ out now!