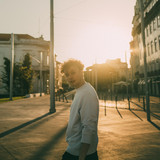 🇮🇪 Dublin-born, London-based Chaya is a classically trained, multi-instrumentalist whose formative years excluded everything but classical music. It was time spent exploring New York City’s underground scene that introduced him to the electronic world. Whilst studying at the Clive Davis Institute of NYU by day, Chaya’s nights were led by the DJ’s at Ladyfag and Unter parties, who revealed to him a love for dance music previously unknown. Now back in London, his classical training and dance passion unite in his song-focused creations. In his own words, Chaya, is “just a 20-something-year-old, clueless kid, trying to figure stuff out”.