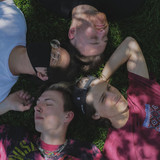 Featuring Not My Weekend

In 2012, in the small university town of Laramie, Wyoming, Patrick Gilchrist and a few friends from school formed a band called Not My Weekend. The group played at talent shows, local art events, and battles of the bands. In 2013, Nicholas Hudson joined as a guitarist. A few years later, Noah Hammontree joined, first playing bass, then learning drums from the ground up. Finally, Ed Ma joined as the band's bassist shortly before they recorded the EP "Yellow" (2018). Produced and recorded by Neil Engle, "Yellow" introduced thousands of people around the world to Not My Weekend's fun and original approach to pop rock, and helped them get signed to the label We Are Triumphant. Driven by the singles, "When You're Around" and "Crawl", the band is grateful to have reached over 1,000,000 total streams on Spotify. The band is influenced by an eclectic mixture of many kinds of music, resulting in a unique sound reminiscent of 2000's era radio rock, complimented by a twist of pop-punk, and a shot of pure sugary sweetness. After a few tours, the band reunited with Engle to record their forthcoming LP "Honeymoon" in late 2019. Though their plans for touring in 2020 were foiled by COVID-19, the guys have been hard at work on music videos, new merch, and other kinds of promotion for the upcoming record. Not My Weekend is preparing to release the "Honeymoon" album in January of 2021.