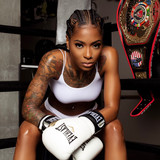 Jamaican-born emcee Hoodcelebrityy grew up Tina Pinnock in the St. Catherine Parish region. She spent her childhood surrounded by reggae music and culture, and when she relocated to the Bronx as a pre-teen, she was immersed in the world of New York rap and hip-hop. She spent her teenage years and early twenties working retail and coped with the boredom by sneaking away from her post and uploading videos of herself freestyling to her Instagram account. It was the rising popularity of these off-the-cuff videos that the Hoodcelebrityy persona was born. In 2015, Pinnock's longtime friend Cardi B shared one of the Hoodcelebrityy freestyle videos and jumpstarted the rapper's internet popularity. Immediately following that post, Pinnock recorded her first single for a song called "Wine Pon It," offering the world the official debut of her style, which blended the raw reggae of her Jamaican roots with the unrepentant East Coast rap swagger of her adopted home in the Bronx. She followed with further singles such as the trap-meets-dancehall minimalism of "The Takeover," and took her songs live, opening for reggae-pop legend Shaggy among others. Her debut mixtape, Can't Believe It's Just a Girl, materialized in the spring of 2017 and she followed it quickly with her second mixtape, Trap vs. Reggae that summer. A more pop-minded single, "Walking Trophy," dropped in November of 2017, softened a bit from the grittier tones of earlier material. It was included on the EP Inna Real Life, which arrived in 2018. ~ Fred Thomas, Rovi