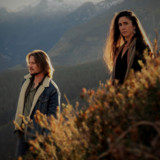 Willo is a singing-songwriting duo based in the French Pyrenees, delivering a fresh and soulful kind of folk music. Formed in 2016 and composed of Cécile (vocals, guitar) and Olivier (composition, guitar, vocals), they prioritise an acoustic sound, interweaving shimmering vocal harmonies with expressive yet delicate guitar tones. Rich of their worldly travels, the duo explores influences from overseas to imbue modern soul with more traditional elements. After releasing an early EP entitled “SEVEN” in 2018, with a largely acoustic set-up, they were naturally inclined to incorporate their music into a wider setting with additional musicians. This lead them to record their brand new album “Eternal Jetlag” in 2021 with a backing band, which provided a natural backdrop to their signature acoustic sound which still remained at the fore.