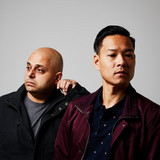 It began as a side project in 2016 for Marcus & Johann, but Secret Spade has blossomed into an exploration of song-based, mid-tempo electronica. Their sounds are ever fluid and they are creating ‘headphone-focused’ music that is deeply rooted in quality song writing, interesting instrumentation and pop structures. Their musical influences reach far and wide, drawing from the likes of KAYTRANADA, SG Lewis and Cosmo's Midnight. Their debut self-titled EP was released in 2017. The highlights included Gallows a broody, emotional piece of chilled electronica, dealing with the subject of addiction. Also, In My Mind an indie edged, slow burner with a wall of sound chorus. Contrast these two singles with the 2019 boogie-funk pop song Over You and you really get a sense that these lads are not to be pigeon-holed. With a string of remixes, including two ARIA #1 Club Chart placings for I Know a Place - Secret Spade Remix and Fallen - Secret Spade Remix, Secret Spade really hits the mark and they have ongoing support from Triple J’s Friday Night Shuffle with The Aston Shuffle. Most recently, their remix of Husky & Simon Field - Free - Secret Spade Radio Edit was featured in New Music Friday AU & NZ and New Music Friday Norway reaching half million streams in just 4 months. In 2021, the sophomore release Towards The Skyline EP was spearheaded by Lust (Let Me Feel) which has been on steady rotation on the Spotify curated playlists Just Chill and Indie Arrivals with over 400k+ streams.