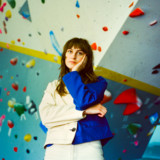 Faye Webster loves the feeling of a first take: writing a song, then heading to the studio with her band to track it live the very next day. When you listen to the 23-year-old Atlanta songwriter’s poised and plainspoken albums, you can hear why: she channels emotions that are so aching, they seem to be coming into existence at that very moment. Webster captures the spark before it has a chance to fade; she inks lyrics before they have a chance to seem fleeting. Her signature sound pairs close, whisper-quiet, home-recorded vocals with the unmistakable sound of musicians together in a room.   I Know I’m Funny haha is Webster’s most realized manifestation yet of this emotional and musical alchemy. Continuing to bloom from her 2019 breakthrough and Secretly Canadian debut Atlanta Millionaires Club, Webster’s sound draws as much from the lap-steel singer-songwriter pop of the 1970s and teardrop country tunes as it does from the audacious personalities of her city’s rap and R&B community, where she first found a home on Awful Records.   In the two years since Atlanta Millionaire Club, Webster’s profile has steadily risen—as she played festivals like Austin City Limits and Bonnaroo and found her way onto none other than Barack Obama’s 2020 year-end list—and she also fell in love. “This record is coming from a less lonely place,” Webster says of I Know I’m Funny haha, which finds her sound fuller, brighter, and more confident.