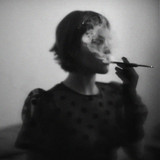 Jade Baraldo started her career early in 2016, aged 17, when she recorded a version of Antônio Carlos Jobim's "Bonita" accompanied by legendary guitarist Helio Delmiro, who had previously recorded the song with Sarah Vaughan and Elis Regina. She went on to write and release her first single "Brasa" in 2017, which went viral in Brazil, topping the local Spotify Viral Charts for 9 days. She's presently seen as one of the most promising voices of brazilian pop music.