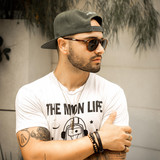 Simply known by his surname, Mike Gazzo is a DJ, producer, remixer, and songwriter originally from Hoboken, New Jersey. While he's produced tracks in several styles ranging from electro to drum'n'bass, he's received the most attention for his radio-friendly progressive house and dance-pop songs, which often contain heavily emotional, sentimental vocals by a variety of guest singers. Gazzo began releasing tracks and remixes online in 2011, and quickly earned attention from blogs. By 2014, he had released original material on Fedde Le Grand's Flamingo Recordings and Dutch label Armada Trice, and completed official remixes for artists such as Ariana Grande and Rudimental. However, he first made a big impact with his remix of Y Luv's "Never Touch the Ground," which dated back to 2012 but was officially released by Casablanca in 2015. From there, Gazzo released numerous singles for the label, including "Rewind" (with Kap Slap) and "What You Waiting For" (featuring Sugarwhiskey), as well as the 2016 EP Evolution. The single "Heart Won't Beat," a collaboration with Aja9, was independently released in 2017 and became a radio hit. ~ Paul Simpson, Rovi