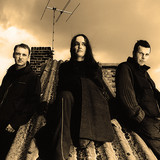 The drum'n'bass trio tagged Kosheen molds something sophisticated and complex, and their hypnotic breakbeats took their native U.K. by storm at the close of the '90s. Consisting by Welsh-born Sian Evans and Bristol dance natives Darren Decoder and Markee Substance, Kosheen's meeting arrived in 1998. Evans was invited by Decoder and Substance to lay down some guest vocals and something clicked. A unit had been solidified and Kosheen immediately began work on their hip-hop/soul-driven sound. The debut single "Hide U" grabbed hold of the dance circuit in mid-2001, later earning Kosheen honours for Best Single at the Drum &amp; Bass Awards in the U.K. BBC Radio 1 raved about it nonstop and trance guru John Digweed was already spinning Kosheen tracks such as "(Slip &amp; Slide) Suicide" and "Catch" into his club sets. Already poised to take over electronica's ever-changing world, Kosheen's debut album, Resist, was issued in their native land in the fall of 2001. Two years later the more rock-leaning Kokopelli came out, and in 2007, after some delay, the trio's third full-length, Damage, which sought to meld the drum'n'bass of Resist with the guitars of their second record, hit shelves. ~ MacKenzie Wilson, Rovi