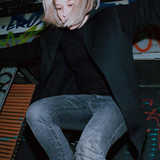 Solid portion of raw and heavy techno, ranging from noise, electronica to modern world music. ZAMILSKA’S heavy, rhythmic sounds filled with lots of bass. Though associated with techno, her music reaches way beyond the definition of the genre and it is not easy to pigeonhole. It oscillates between electronica, world music and noise. She takes inspirations from various sources: raw sounds taken from native Silesia, precisely interlaced with tribal chants and oriental elements. Holding sturdiness of an industrial grinder, pensive yet melodic, trancelike. ZAMILSKA debuted with two singles: Quarrel and Duel 35 (which was used by Dior during one of the fashion shows featured in Tokyo). She had the opportunity to work on various musical (remixes) and fashion projects. She also toured Europe playing festivals such as CTM, Primavera, Norbergfestival, TodaysArt, Insomnia, Fantoche and many more.