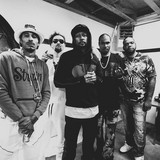 Bone Thugs-N-Harmony is an American Hip Hop music group hailing from the streets of Cleveland, Ohio. The group includes members Krayzie BoneBizzy Bone Wish Bone and brothers Layzie Bone & Flesh-n-BoneThe group met Eazy-E at a concert he promoted in Cleveland where they auditioned in his dressing room. Once signed to Ruthless Records, BTNH released their debut EP Creepin on Ah Come Up in 1994 with hit singles Thuggish Ruggish Bone & Foe Tha Love of $From 1995-1997 BTNH reached their pinnacle in the game with their best-selling multi platinum album E. 1999 Eternal with help from their #1 hit single Tha Crossroads They followed up their efforts with their first double album 'The Art of War' featuring the song 'Thug Luv' with the late 2Pac That same year they featured on The Notorious B.I.G. album 'Life After Death' on the song Notorious Thugs - 2014 RemasterThe group released BTNHRESURRECTION in 2000 & 'Thug World Order' in 2002. The group became a trio in 2006 and released 'Thug Stories' and Strength & Loyalty in 2007 that featured the #1 single 'I Tried' featuring Akon. In 2010 all 5 members reunited and they released the album Uni5: The World's Enemy

which brought them back to the top of the charts.Since then they have focused their attention on releasing singles like 'Everything 100' featuring Ty Dolla $ign & 'Reach for the Stars' featuring Wiz Khalifa. Group members Bizzy Bone & Krayzie Bone also released the much-anticipated duet album 'New Waves'.