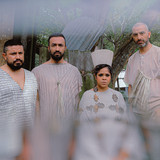 The legend begins with their first EP, 2016’s El Corredor del Jaguar, and followed up with the occult psychedelia of Abya Yala. In 2019’s Ahomale, the New York-by-way-of-Colombia troupe fuse the perennial rhythms of the Afro-Latinx diaspora with a modern-day consciousness, while tracing the prophetic traditions of our ancestry. “The more we’ve played music together, the more we began to discover things within ourselves that we were previously unaware of, almost like a energy. And that’s being communicated through our music,” explains Prince of Queens in the making of Ahomale. Ultimately, Ahomale is a catharsis of divine feminine force helmed by their powerhouse vocalist, laden with the teachings from a bygone era, in tune with the spiritual realm. “Our spirit and energy have passed through multiple generations,” says Prince of Queens. “We might not be open or allowed to explore it because of Western society’s conditions. But the idea is that we are receiving messages from the past, and from our ancestors that each one of us carries.” In nearly 40 minutes of eye-opening thrills and chills, the listener experiences the pedagogy of Ahomale, journeying through her epiphanies and enlightenment. “Ahomale is a warrior, not the sword and shield type, but a woman who is ready to listen to her heart, follow her intuition and connect with her ancestors,” Oliveros avows.