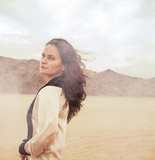 Memories crystallize over time. The years give form to momentary figments, immortalizing personal experiences and preparing them to be forever preserved, passed down, and shared. The passage of nearly three decades finally unlocked the creative floodgates for Rain Phoenix to craft her 2019 solo debut, “River” [LaunchLeft]. The singer, songwriter, activist, actress, and philanthropist first re-visited her earliest foray into music as one-half of Aleka's Attic alongside late big brother River Phoenix. On the 25th anniversary of his death in October 2018, she made the decision to release the split Time Gone, boasting two unreleased tracks from Aleka’s Attic—“Where I’d Gone” and “Scales & Fishnails”—alongside her first-ever solo composition “Time is the Killer” featuring Michael Stipe of R.E.M. “River” flowed out of this. “Once you open the creative portal, you don’t really have control over what happens next. It grew organically and took on a life of its own. It wasn’t in the head; it was in the heart.” In order to siphon this flurry of emotions into songs, she enlisted the help of longtime collaborator and friend Kirk Hellie in the producer’s chair and chose to utilize her LaunchLeft platform in order to release the record. “It’s like only seeing half of life if we’re not looking at death. I hope “River” can be both a source of solace for those who grieve and a life-affirming record.”