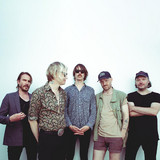 The members of Refused were all in different bands in Umeå in the early nineties, aware of each other, playing shows together but separated by the unshakeable apartheid of underground music. A small town's subcultural cliques are not to be trifled with: since there's no actual subculture the cliques are all people have. In the winter of 91 however, David, previously lodged in the tiny Death metal faction of the scene, and Dennis, 3 years David's senior and a local punk icon, flatly rejected this code when forming Refused. Thereafter they did what bands do: toured, put out ok records, evolved, disagreed regarding the bands essence and broke up for 14 years before reconvening for a triumphant comeback tour. They say ruins are the triumph of oxygen and time, and time had definitely not treated all parts of the Refused machine with the same care, but after some fine-tuning they were able to set about re-configuring their artistic objective. DH Lawrence wrote: "It's better to die than live mechanically a life that is a repetition of repetitions" and that basically sums up the band's ethos. So is there a point to this rambling? The answer is no. But if you've made it this far I guess you deserve some sort of pay off, so here's a joke by the great Norm Macdonald: "I wouldn't call myself a fan of Steampunk. But I will say, it is the healthiest way to prepare punk." Refused have a new record out called "War music" and it's absolutely brilliant.