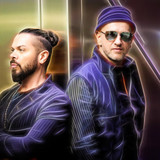 Part Of The Art

Featuring Part Of The Art

Part of the Art (POTA) was originally founded in 2010 by the Cologne-based musician and composer Carsten Düsener. In 2011 he met the well known german singer and actor Stephan Runge, who had already successfully released a great number of German-language solo albums and singles. Together they wrote and produced their first album Retronika, a rather experimental and darker Electro album, that was released in 2012. In 2013 their second album Poptronika was released, on which the first cover versions can be heard: Sweet Dreams from the Eurythmics and Send me to Angel from Real Life, as well as a cover version of David Bowie's hit Let’s Dance, in which they collaborated with Bowie's ex-girlfriend, the entertainer Romy Haag. 2014 the shows got bigger, and soon POTA played gigs in front of up to 40,000 spectators, won first music awards and entered the charts in different countries. In addition, they developed their own sound: A modern mix of electronic, trance and pop, a sound with which they interpret the hits of the 80s idiosyncratically and unmistakably. At the same time POTA’s

third studio album Undercover was released. After extensive tours and concerts in Germany and throughout Europe, as well as several other charted singles and EPs, POTA are now among the most important and successful cover bands of the 80s in Germany. Inn 2018 their 4th studio album 80s Hits Reloaded was released.