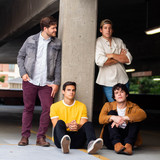 Swim is a pop-rock band from Stony Brook, New York. The members of SWIM inherited a love for classic rock and combined it with their love for indie rock artists like The Killers and alternative artists like The Lumineers and Catfish and the Bottlemen to create a modern pop-rock sound that is unique and memorable.   After emerging as one of the top band’s on Long Island, SWIM captured the nation’s attention while performing on stages at SXSW in Austin, Texas in March of 2018. Following the 2017 release of SWIM's sophomore effort, Finally, Someone, the band broke through with their first single, Heartbeat Connection, propelling SWIM to over 1 million streams on Spotify alone.   In 2019, SWIM released two additional singles, The Chase and Pass By. In the summer of 2020, the band followed with their Pass By - EP, a collection which included tenderly-performed stripped versions of the 2019 releases.   Today, SWIM is working on recording and producing their debut LP at Zin Records, a project which they intend to release in 2021. Their latest single off of the project is "Never Knew".