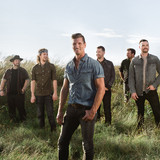 With their signature sound of positive-minded, bluegrass-tinted country, Brad Rempel leads the critically acclaimed group HIGH VALLEY. The band has received praise from Rolling Stone, Pandora and more for soaring harmonies and memorable songs influenced by artists such as Diamond Rio, the Everly Brothers and Ricky Skaggs, the latter of whom has served as both a mentor and collaborator. As a frequent performer at the Grand Ole Opry, High Valley is known for their fan favorites “Make You Mine,” “Grew Up on That,” “I Be U Be,” and Top 10 US Country radio hit “She’s With Me.” A strong international appeal has earned them more than 500 million streams in the US and Canada, six Canadian Platinum certified singles, three #1s at Canadian Country Radio, two Canadian Gold certified albums, and back to back Gold certified singles in the US, making them the highest selling Canadian band in Country music history. High Valley continue to make waves as a breakout act in country music. They received nominations for the ACM New Duo of the Year, and they have earned multiple CCMA Awards wins and Juno Awards nods. In addition to appearances on Live with Kelly and Ryan, TODAY and CBS This Morning, the rising group has brought their music to fans across the world selling out shows in the US, Canada, Germany and the UK.