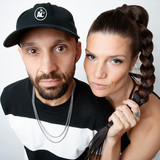 Canadian DJ/production couple, Average Citizens “bring only the best wobbly basslines, booty shaking vibes, & bouncy goodness to the underground Vancouver scene. Their enticing stage presence & high energy performances will leave you sweating & begging for more.” [Fresh Music Freaks]. They maintain a solid tour schedule on the west coast, getting booked for festivals like Shambhala & Genius Loci. Starting to gain the attention of a global audience, they’ve performed in 7 countries. “Infusing hip-hop elements with future house & a smattering of UK-inspired bass, Average Citizens infectious, carefree style is irresistibly danceable.” [DJ Mag]. They have 26 releases on labels like MalLabel, Westwood X & Sheppard Records, where they hold 7 of the top 10 tracks. Alongside several chart-topping releases, their debut EP “On Yo Block,” hit #1 in Future House Releases & “Get Some Money,” hit #1 in Bass House Releases on Beatport & was aired at Coachella & on Diplo’s Revolution. Average Citizens recently [Dec 2019] released their debut album, a 7-track story album. Each track represents a pivotal moment in their journey together thus far. Spend some time with Average Citizens & you'll quickly learn that they operate out of pure love & integrity. They are the co-founders of the Rise & Shine FamJam Fundraiser, a festival that donates 100% of proceeds to charity. The love & passion Average Citizens have for their craft & for each other is undeniable & transcends everything they do!