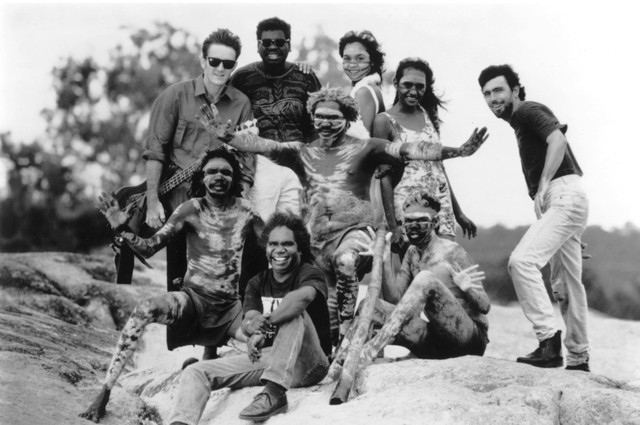 Yothu Yindi is the most successful and internationally recognized of Australia's aboriginal bands. Their importance lies in their fusion of traditional music and performance with contemporary rock. The name of the band translates as "mother and child" and is essentially a kinship term used by the Yolngu people of the Northern Territory's Arnham Land. The group's central figure Mandawuy Yunupingu and clansman Witiyana Marika were originally part of the rock band the Swamp Jockeys with non-aboriginals Cal Williams and Stuart Kellaway. They gathered other aboriginal musicians and dancers to become Yothu Yindi, a troupe initially created to perform at cultural events both in Australia and internationally. A late 1988 tour supporting Midnight Oil both in Australia and North America brought the band to Sydney where they spent a day recording a demo tape. Mushroom Records released the demo as it was as Yothu Yindi's first album, Homeland Movement. One side comprised Midnight Oil-like politicized rock. The other side of the album concentrated on traditionally based songs like "Djapana (Sunset Dreaming)" written by former teacher Mandawuy Yunupingu. Mandawuy's family has a long and proud tradition in the struggle for aboriginal land rights and at the beginning of the 1990s there was political talk of the possibility of a symbolic treaty between black and white Australians. In an attempt to keep the idea on the political landscape, Midnight Oil's Peter Garrett and Paul Kelly collaborated with Mandawuy on a song called "Treaty." When it was initially released the song hardly created a ripple, treated as the political statement it was. Melbourne dance remixers Filthy Lucre decided to work their magic on the song, favoring the musical message over the political one. "Treaty'"s success spread to Yothu Yindi's second album, Tribal Voice, which took the band around the world and eventually saw Mandawuy Yunupingu named as 1992 Australian of the Year. Initially, Mandawuy used his music profile to further the cause of his "other" job, as headmaster of a culturally mixed school in Arnham Land, but he ended up being forced to apply for leave to concentrate on his music career. Ever since "Treaty," Yothu Yindi has straddled its two musical words, traditional and commercial, with varying success. ~ Ed Nimmervoll, Rovi