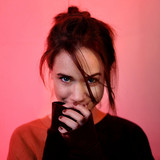 German indie pop songstress Lilly Among Clouds combines elements of retro pop, soul, and classic rock with sympathetic electronic flourishes, and brandishes a remarkably rich, powerful, husky voice that it's hard to believe came from someone her age. Born Elisabeth Brüchner in 1990 into a musical family and brought up in picturesque Lower Bavaria in south-east Germany near the Austrian border, Lilly was drawn to music as a young child, learning to play the piano and, later, guitar. Inspired by Alanis Morissette, Tori Amos, Norah Jones and, later, Rihanna, she began writing songs and while still in her teens began performing under the name Lilly Among Thorns, playing in local clubs. She never thought there might be a living in it until she entered a Finnish battle of the bands contest and came first, winning a slot at the following year's Maata Näkyvissä Festival in Turku, where she played to 10,000 spectators. At the age of 20, she moved to Würzburg in northern Bavaria, where she formed a band, also named Lilly Among Thorns. The band recorded a few tracks in an alt-pop vein, including the stunning "Illusions," but never released anything. Lilly was insecure and still unsure of her musical direction until she found her musical match in producer Udo Rinklin, who had recorded Laith al-Deen's 2004 German number one album Für Alle. Under his direction, she blossomed creatively, winning the Würzburg Young Culture Prize in 2014. Changing the name of the band to Lilly Among Clouds, she recorded her self-released, eponymous debut EP with Rinklin. It was very well received, drawing comparisons with Fiona Apple, Cat Power, Regina Spektor, Adele, and Amos, and won her a record deal with PIAS. Rinklin also produced her debut full-length album, 2017's Aerial Perspective, whose more electronic moments were comparable to the work of other English-singing Germanic chanteuses like Sigrid and Lykke Li. ~ John D. Buchanan, Rovi