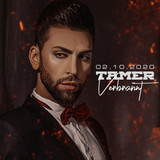 Music fulfills energy in us in a way that nothing else can. For as long as we’ve existed, it has fed the soul and given life to our bodies.

This sentiment rings especially true for solo artist Tamer. Today, he continues to carry this tradition on with his own musical talents. Regardless of it being singing or dancing, it leads to feelings of happiness that Tamer aims to push onto his listeners. He puts these heartfelt lyrics that are inspired by the most emotional times in his life, while sharing the stories of his journey with his fans along the way. He is now pushing himself forward into the world of solo work after spending years as part of the German band Jamatami. Tamer and his group found their music in the Top 20 charts, achieved countless signings, found themselves on TV and radio interviews, and toured extensively across the Netherlands and Austria. Additionally, he is known for his support work for RTL Spendenmarathon and Heimat Almanya alongside celebrities Nazan Eckes and Dennis Moschitto. Tamer is now looking to use his depth of experience in the music industry to reignite his solo career in 2020. After a successful solo project ‘Dance All Night’ in 2012-2013, and a Turkish album release in 2014, his long-awaited German release 'Verbrannt' is scheduled for release in 2. October 2020.