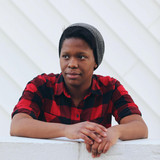 Egypt Speaks is a Spoken Word Artist from Cleveland, Ohio. After releasing her first full length album Stories independently in 2014, Egypt has toured the country and beyond sharing her stories through the art of poetry. At age 16 ,Egypt received the rank of 1st in the State of Ohio and 2nd in the nation in the category of spoken word according the the National Fine Arts Association. Later in the same year she placed 3rd in a world wide competitions for preachers of all ages called YPI. At 17 she released her first book of essays and poetry called Stories that received overwhelmingly positive reviews and was featured on JesusWired.com's "What You Should Be Reading" in 2016. In 2017 her 5th album, and latest full length release entitled Letters and Scars found itself on the first round Grammy Awards Show ballot. After touring quite literally coast to coast in 2017, she rounded off the year on a high note after being named Teen Christian Radio's Female Artist of the Year. Egypt is a dynamic poet, emcee, speaker, and author who has also had the honor of sharing the stage with artists such as Phil Keaggy, Social Club Misfits, Audio A, Tedashii, Switchfoot, The Newsboys