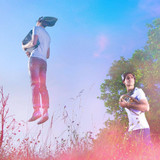 Making their debut in 2015 with the self-released single ‘Get Real (Can’t Touch Your Love)’, Anglo-French duo Loframes (London based musician James Yuill &amp; Antibes producer Franck Russo) quickly established themselves as ones to watch, their stylish mix of synth-pop, deep house and nu-disco winning them a legion of fans amongst DJs, public and press. Building on their initial success the band cemented their reputation with acclaimed remixes for some of the biggest acts around, including M83 and Erasure, and with 2 more original singles 'Since You've Gone', featuring French nu-disco star Anoraak on US label Midnight In Paris, and 'Real Life' on fast rising French label Splinter at the end of 2017. Having taken a sabbatical whilst James recorded and released his latest solo album (2017's 'A Change of State'), the duo are now back fully recharged and refreshed with several collaborations and releases already lined up for 2018.