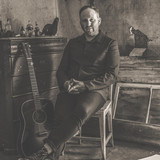 The singer/songwriter Niklas Rapp are up to date with new material early 2021. Backed by musicians in class with the best Sweden has to offer. The ten thousand hours are done.   The debut album Övergångsrit was released in the autumn of 2015 after a multi-year production. After the debut, more singles have been released. On New Year's Eve 2019, the single Then was released, which immediately hit the Spotify list New Music Friday Sweden. The second, self-titled album Niklas Rapp (Deluxe Version) was released in February 2020.   With canceled gigs in the spring, Niklas entered the studio again. The first taste of the new sound is the latest single Thoughts, which was played a lot on Swedish radio in the autumn of 2020.   Niklas also writes music for other artists. Among other things, he wrote music for the songs Mårtanberg and Herregud for the album Idioter lär oss och vi lär varann (2019) with Broder Henrik Rapp. Niklas also sings lead in the song Lilla Dig (verse 1).