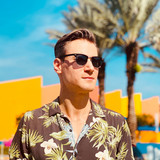 His Mixes are supported by the likes of Robin Schulz, Lost Frequencies, Felix Jaehn, Hardwell, Don Diablo, Sam Feldt, Lucas and Steve and many more. His emotional deep house cover of “Beth – Don’t you worry child” (Kontor) made it to the ITunes overall Top 50 charts within a few days. The appendant YouTube video already got 20 million views. His Cover Track “Higher Love” (Sony) with the UK Singer Grace Grundy made it to already 33 million Spotify streams and #11 of the Viral Spotify UK Charts. But that’s not all. No less than Pete Tong praised his remix from “Godspeed” as BBC Essential Tune and an “amazing uplifting piece of Balearic house music”. The mix climbed also to #01 of the Hype Machine Remix charts. In 2020 he produced a new House Mix of the classic RnB Hit “Ain´t that just the way” together with “Lutricia Mc Neal” which made it in more than 150k Playlists, several Charts and finally nearly to 10 Million Spotify Streams. But also outside the studio he is developing rapidly. After a festival tour in Asia, he also played lots of shows in Europe such as Mysteryland, Dreamfields, Parookaville, World Club Dome